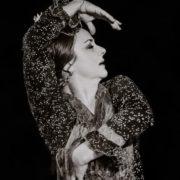 Born in Elche (Alicante), where she began her studies in classical dance and Spanish dance in the school of her mother, Pilar Sánchez. At the age of 18 she moved to Madrid where she began her professional career in dancing with different companies: Compañía de Carmen Cortés, Manolete, Antonio Canales, El Güito, among others. 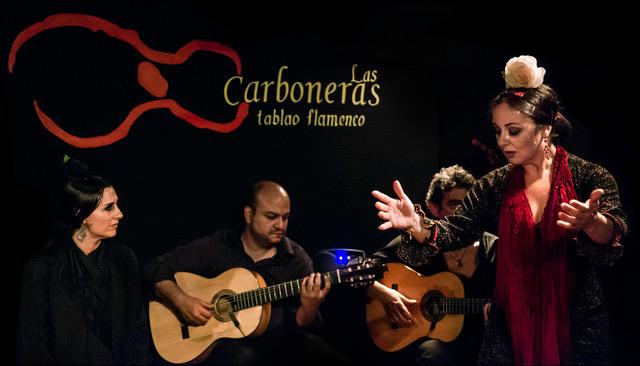 Since 2000 she runs her own tablao, one of the most prestigious in Madrid, Las Carboneras, where she currently dances every night.

She is a founding member of the company Arrieritos with whom she has worked in many of its productions, including “13 rosas”, winner of the Max 2007 awards for the best show and the best choreography. The company Arrieritos was created in 1996 and since then has premiered the shows: “Arrieritos somos” (1996), “Ande yo caliente”, “Todos los gatos son pardos”, “Diario de un abrigo”, “Tablaos, fiestas y saraos “, “Despacio y solitos”, “Entablao” and “Oh solo mío”. The company has managed to consolidate a line of work based on the miscegenation of different styles, both musical and choreographic, between the world of flamenco and that of contemporary stage dance.

She has also developed her teaching work in countries such as the United States, England, Italy, Israel, Brazil, as well as in various schools in Spain. In 2017 she taught a flamenco course and participated in the tablao of Albuquerque (New Mexico). 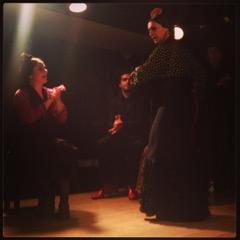 Tacha: “In a tablao is all like more animal”

The artistic co-director and co-founder of the Tablao Las Carboneras, plus dancer, talks about her 28-year career in flamenco, from “El Güito”, Antonio Canales, and Arrieritos; the dream fulfilled which led to her having a tablao, and her vision of contemporary flamenco, that she says it is between the vanguard and the old.

—The Tablao Las Carboneras is the culmination of all your experience, is the result of everything you wanted to do in flamenco when you were 18?

—Well, I had not thought of it as I wanted to have a tablao, but it is true that with time and when I started dancing professionally flamenco and I started to find out that it was flamenco for tablao what I liked as form of expression. I love to dance in companies, theaters and shows, but flamenco for tablao is what fills me. Yes, I did have a dream of having a tablao.

—Everything went to reach that conclusion at the end that was having a tablao.

—And it was a dream that one day I dreamed of and that it suddenly happened. I was lucky: I met Manuela [Vega] and Ana [Romero]. Manuela’s husband [Ernesto Díaz] had already opened a restaurant [Las Mañanitas] and he knew well the hostelry part. When they saw this place, she realized that this was a tablao: “This is a tablao, Ernesto”. She had been mom and was a little off, but we had been long time partners in other tablaos and we knew how to work together. Then she told us to Ana and me (and other people) to be partners of the tablao.

— It could have happened that you created a flamenco company, but you did this, which is something different.

—Of course, because our focus has always been dancing flamenco for tablao farther than for theater. Is our way of seing flamenco, or to feel it, let’s say.

—Because improvisation is important?

—Yes, because when you’re in a tablao everything is improvised and an energy is created that it isn’t created in a scenario when all is assembled. Improvisation makes you free and that’s why is a therapeutic dance. The truth is that the feeling you get when working like that, that you do not know what will happen, between freedom to vertigo, it’s a feeling that the theater is not giving you. In a theater you have to go with an assembled show, rehearsed music, cuts … here you come in and here you go out … In a tablao’s all is very tradicional, like always, respecting the canons and codes and all what surrounds flamenco, but from a more animalistic site. It’s like going to a jam session, there plays the singing, guitar, dancing. It’s like a game, really.

—Besides, you usually vary greatly the group of artists involved in that game.

—Sure, every fortnight the tablao cast changes and people are always very alive, very active, very receptive. Because, of course, we are the ones who are always there, we come in and out, but for those coming from outside always have a day of adaptation of the guitarist with the other guitarist; Ángel Gabarre, which is permanent, which is one of the best singers for dancing in Madrid, and all singers want to work with him because they learn a lot. So is created…  in our tablao professional people go for pleasure, because they enjoy working there because our way of working encourages them, and moves them, they like it a lot, they enjoy it a lot.

—Would you like to mention the people who have influenced you in your time of dancing in tablaos and companies?

—Yes, of course, I have coincided with many people. But what influenced me was being with Antonio Canales, with all the musicians who worked with him, with “El Viejín” with Ramón Jiménez, from whom I learned a lot, but I’ve also been with “El Güito”, although with him it was sporadic. With Antonio I was five years. Also, with my colleagues we created a company, Arrieritos, which still exists, what happens is that I am no longer in the new productions, but that was also a beautiful work that we did because we were investigating with flamenco and contemporary dance; I would not call it fusion because I kept dancing flamenco in Arrieritos, not nothing but dancing flamenco, but let’s say that the concept of the shows was more contemporary and also marked a change for all the flamenco people and their way of building shows: Arrieritos pioneered in that field.

—And after seeing these two aspects of flamenco, what sense do you have of where flamenco is today, both tablao and theater?

—Now? Well, now there’s so much … There are two extremes right now, is what I see. At the end it is Israel Galván, which is not considered flamenco by many people, as purists. And I do see it as flamenco, what happens is that he is on the stratosphere, it’s like dancing flamenco in 3D, he’s from another galaxy. But in my opinion he uses flamenco and he knows how to use it, really. That’s one end … O Rocío Molina, who is also a researcher. And then there is the flamenco among the rest of us mortals, because these are immortal, haha​​, among others there are many people, who dance very well, which are returning to the oldest. It is like fashion, now leads eighties, seventies, sixties, ranging cyclical. Well, in flamenco is a bit the same, it is becoming much looking at the old, to the formerly form of dance, of course with the evolution that has taken apart the dance, guitar and singing. I see young people today focusing on the oldest form of dance.

—Another of the successes you have had with the flamenco tablao is the creation of a dance competition, which is where you see what is being cooked now.

—There it is. There are most of the contests there in flamenco, but not all, where you perform your dance prepared. Actually, this contest is designed for tablao, you get to the tablao not rehearsing with anyone, you raise and dance and everyone know their profession. In that aspect the contest is focused, people come with no rehearsal, to dance with the musicians we give them, and so they are all equal and have to know how to dance all styles: we ask you to tell us at least three palos that do not match and they can be put on a show; while we do a competition, we’re seeing a show, audience come to it and there can not be four alegrías or soleás. The competition is having a really cool effect that has also caught in a moment of crisis and for us is an effort, but on the other hand, we see that people have no goals, no illusion because there is no work and this, of course, motivates them to set a goal or at least enjoy a day of work with a few awesome musicians and a very cool atmosphere is created, all the comrades go, everyone supports everyone, a day in order to enjoy the musicians behind them so that they best express themselves.