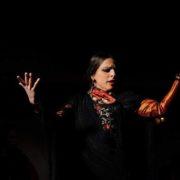 She made contact with dance for the first time at age 5 at the Nieves Camacho dance academy in Córdoba, continuing her training at the flamenco dance studio Encarna López and Rafael del Pino “Keko”. In Spanish dance she studied at the Professional Conservatory of Córdoba, Luis del Río.

Between 2001-2004 she was a member of the show “Siempre … flamenco” directed by Inmaculada Aguilar and sponsored by Cajasur, which also includes renowned personalities such as cantaor José de la Tomasa.

Participation in the show “Invitación a la danza” organized by the Orchestra of Córdoba.

Acts in the XIV Flamenco Biennial, in the Tribute to Maestro Granero (Giraldillo Award for the best choreography) year 2006.

Participation as soloist in the cycle of performances of the singer Manuel Cuevas (winner of the Lámpara Minera award), highlighting thw one at the Cante de las Minas Festival of La Unión.

Member of the II National Dance Congress held in Córdoba.

Member of the Chiqui de Jerez Company with the shows “Carmen” and “Pasión Andalusia”, during a tour in Italy (San Remo, Florence, Milan, Torino, Catania …). 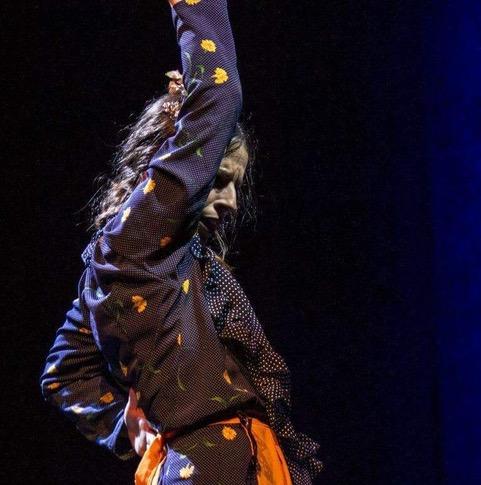 She is part of the show “Bailando a Camarón”, directed and choreographed by Javier Latorre.

Participates as a soloist in a circuit of clubs and tablaos in the province of Cádiz.

Participates in the XIII Festival de Jerez, with the Company of Andrés Peña and Pilar Ogalla in the show “Cádiz de la Frontera”.

She joined the Company of Daniel Navarro, in the show “Cálida hondura”, premiered in the second “Noche Blanca del Flamenco” in Córdoba, as a soloist.

She is a soloist of the show organized by the Seville City Council in collaboration with the Eva Yerbabuena Flamenco Ballet “Devoción y persuasión. Santas de Zurbarán “.

She works as a soloist and teacher in Japan for the company Iberia, represented by Teruo Kabaya.

She participates as a teacher in the Flamenco Estudio Danza school directed by Tamara López and Úrsula López.

She is part of the Condarça flamenco company with the show Romero de Torres.

Collaborates as a soloist in the show “Rojo y rosa” by guitarist Agustín Carbonell “El Bola”.

She began the work of repeater at the Flamenco Ballet Eva la Yerbabuena. 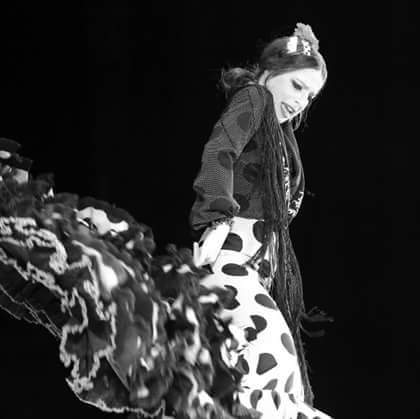 She is part of the cast of Tablao Garlochi in Tokyo during the months of February, March and April.

Teacher in schools such as Alicia Márquez and Flamenco Estudio Danza by Úrsula López.

«The tablao is the most natural, the most authentic and where you learn the most»

«About my professional training, I think it was one of the most beautiful periods, the one I remember with the most affection, a stage also with great truth and eagerness. As an anecdote, I remember my first contract, which was in Tivoli, in Málaga. It was a bit of a revelation, I had a great time because I was among friends and it was like: I can’t stop doing this. I quit studying, I was studying the career, I think I was 18 years old. I saw it clearly: I had to dance.

»As experiences that happen in this profession there are many because, in addition, this is so changing, today you are here and tomorrow you are there, now you have a short contract in this city, now you have a long contract in another, now you have a lot and now you have little … I think you live so many things that remembering them is sometimes complicated. In addition, we are people who adapt a lot to changes since there is no choice. And so many anecdotes and different experiences that we live. But if I have to say something that set the path for me, I think it was the fact that I entered the Centro Andaluz de Danza with the maestro Granero as director, which was what made me come to Seville. And, once in Seville, when I entered Eva la Yerbabuena‘s company. I think that was what marked my path and for me they were very special years. Also a few years that marked my way of seeing learning were when I was a repeat of Eva, a time when I learned and expanded my vision. I have to thank her very much. Anecdotes there are thousands, but what I said is something that really marks.

»And the tablao for me is a totally authentic learning, what happens there is natural, it’s true. Above all, when you get to communicate or give what you want or connect with what you have to connect and you get to express it, that is already fantastic, it is the best of everything, the best and the reward for everything. And you back go home happy and say wow, I could. Then there are days that you cannot, because of that, because it is true and every day it is not the same and you do not have the same capacity or your understanding is not the same, but for me the tablao I think it is the most natural, the most authentic and where you learn the most ».