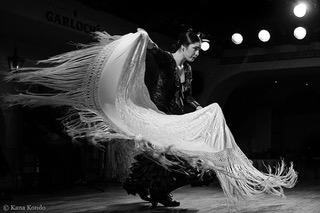 She has collaborated as a dancer in the film “Flamenco” by director Carlos Saura. She has performed in the festival Más y Más in the tablao Los Tarantos (August 2008); in the play “Fedra” directed by Javier Latorre and Miguel Narros sharing the stage with Lola Greco, Alejandro Granados, Amador Rojas, Carmelilla Montoya (2009-10); at the festival in Gorbió (France) in 2013; at the Círculo de Bellas Artes in Madrid with Rafael Amargo (2013); in the show  Ópera y Flamenco at the Poliorama theater and Palau de la Música in Barcelona (2013/14); at the Teatro Real (Madrid) with Ara Malikian in November 2014; in the Generalife gardens at the Granada and Lorca Festival as the first dancer with the show “Poeta en Nueva York” by Rafael Amargo (2015); in the company of Antonio Canales (2015); at the Jazz Festival of AARUS with Perico Sambeat and the Jazz Orchestra of Denmark (2016 and 2017).

She has collaborated as a choreographer in the show of José Agudo (choreographer/ assistant of Akram Kham) in his show “Silk Road“.

«For me it was a very significant change of stage the moment I went to Madrid to live, opening my mind and seeing flamenco in a different way: much wider, different styles …

»In my dance I have been influenced by many teachers, trying to have my own personality, but at the same time influencing myself by maestros like Juana Amaya, Antonio Canales, Carmen Amaya, La Chana, among many others.

»For me tablao is where authentic flamenco is lived, the audience that comes to a tablao receives very closely everything a dancer throws off with his or her dance.

For me it is one of the places where I feel better because the communication I have with my colleagues is very close, it is as if we had a conversation in which each one intervenes, contributing with everything he or she has. It is the place where I let all my emotions flow. I always try to keep moving forward and the tablao is the place that gives me the opportunity to continue with my learning ».