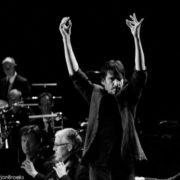 He is a flamenco dancer and choreographer with a degree in Spanish Dance from the Professional Conservatory of Córdoba and with 6 years of classical ballet. Before starting his solo career, he is the first dancer in several dance companies, such as Javier Latorre, Antonio Canales, Cristina Hoyos, Aida Gómez, Los Ulen, Javier Barón, Ballet de Murcia and the Ballet Flamenco de Andalucía. Then he collaborates with guitarist Vicente Amigo, pianist Chano Domínguez and cantaor El Pele, among others.

Awarded the first Mario Maya prize in the national flamenco art contest of Córdoba in 2001 and winner of the first prize El Desplante in the International Festival de Cante de las Minas, in La Union (Murcia), in 2005.

Among his most successful collaborations, stand out those of the show “Ambivalencia” by Javier Latorre in 2000; “Rinconete y Cortadillo” in 2002 and the show “En el nombre de la rosa”, where he choreographed his own piece.

In 2007 he began his collaboration with the guitarist Vicente Amigo, which continues until 2015 performing in the shows “Poeta”, “Un momento en el sonido”, “Paseo de Gracia” and “Tierra”.

His artistic relationship with Chano Domínguez begins in 2007 when the pianist requires him for the Vienna Jazz Festival 2007, where he shares the stage with artists such as Pat Metheny, Concha Buika, Chucho Valdés and many more.

He also develops an individual career performing in European, American and Asian festivals and theaters. He is invited to the Liguita Festival in Liechtenstein in 1999 along with artists such as David Russell, Costas Cotsiolis, Jorge Luis Zamora, among others. Closing the Festival del Circulo Machado in Luxembourg with the shows “3 bailaores” in 2001, “Rinconete y Cortadillo” in 2003 and with his own production “Un ramito de suspiros” in 2009.

A long tour in Japan in 2004 opens the doors of the Asian audience that conquers with the show “Selectos bailaores”.

He acts as first dancer with the Ballet Flamenco de Andalucía, directed by Cristina Hoyos, toured Cuba in 2007 and is enrolled, along with Cristina Hoyos, in the honor book of the Gran Teatro García Lorca in Havana and receives special mention in the Awards Gran Teatro de La Habana, presided by the Cuban dancer Alicia Alonso.

In 2009 he formed his company, directed and choreographed the show “Cálida hondura”. With original music by Juan Requena, it premieres at the White Night of Flamenco in Córdoba, at the Theater Festival in Palma del Río, and at the La Latina theater in Madrid as part of the “Veranos de la Villa” program. With the collaboration of Javier Latorre and Vicente Amigo.

In 2011 he premiered at the Adriatic Mediterranean Festival of the city of Ancona (Italy) the show “Piano and duende” with choreography and idea of ​​Navarro and music by Chano Dominguez and Juan Requena.

Between 2014 and 2015 he toured different international festivals with his shows “Ramito de suspiros”, “Piano and duende” and “Asómate”, as the Montreal Flamenco Festival, and in the Asian programming of the Gorky Theater of Saint Petersburg and other Russian cities.

“Las Carboneras is a magical place”

«I am a bailaor who comes from the classical training, I studied at the Conservatory of Córdoba and I graduated in the medium degree of Spanish dance. At the same time I did six classical courses with Araleo Moyano. Then Javier Latorre opened his studio next to my grandmother’s house and he was the one who gave me the option to start my career with good steps in classical training. I am not self-taught in any aspect, I come from working hours.

»As for my career, I was fortunate to participate in several important shows by Javier Latorre such as “Rinconete y ‘Cortadillo” or “En el nombre de la rosa”or with Antonio Canales in “Torero”. They were very important moments in my career that marked me a lot and I learned a lot, not only from the dance but from everything that surrounds the scene and so on. I would highlight Javier Latorre or Antonio Canales as maestros with whom I trained. And on a musical level, once I started a solo career, there are three people that marked me a lot. Obviously, Vicente Amigo, with whom I spent eight years touring the world and making me enjoy the most wonderful music I’ve ever heard. Another person is Chano Domínguez, who opened the field of jazz and made me see that music is very rich and that fusion, working with other music, would enrich me very much. And so it was because he put me with artists like Wynton Marsalis, Paquito D’Rivera, Piraña… I do not know, he put me with very good artists in theaters and important festivals and with whom I keep working and going on tour in the United States. And the third person, more on foot, is Juan Requena, guitarist from Málaga who was the one who made me take care of the music and who gave me a vision of the dance that I loved. And I think that from there I put all the knowledge and all the experiences I had in one way. Juan Requena is a person who has also marked my career very much.

»I would like to add that there is a fourth person, Pedro Córdoba, whom I also had as a reference from a young age and at the foot of the field, someone who made me see the dance in a different way. So I would like his name to also appear as a fourth important person in my career.

»What does it mean for me to dance in a tablao? Well for me it was the first test of fire. To leave a conservatory and face a tablao, to the absolute truth, to the bull, was an almost definitive challenge. Or I was fine and I thought I could and had possibilities or directly I would not have followed the path. But I was very lucky, I was in Los Gallos, in Seville, a place where they made me learn at lightning speed with great artists on the side. And nowadays it has become a necessity because we all have our agendas, exits and commitments and those performances are gratifying in serious places, but then in the day to day there is a need to be able to unburden you, at least in my case, all the sensations both good and bad and put into practice something that you can then take to a theater if you have seen that it has worked before in a tablao. And the truth is that the tablao, which is to gather a group of people, that each one comes with its history and in that moment be able to, with the soul, create a climate and make enjoy people that has paid a ticket. And to people that, like us, that we are going to enjoy, but we do not always go on stage with the one hundred percent willingness to believe that everything will turn out well and many times it goes to two hundred percent. And, if I have to highlight something, Las Carboneras is a magical place where that happens often and that’s why I like to be there with you from time to time».