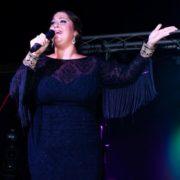 Ana María Polanco, born in Cádiz on July 26, 1989, is a flamenco singer. Her beginnings in the world of flamenco can be seen from her preparation at the academy through the dance with the Cádiz-born bailaora Pilar Ogalla, who discovers that Ana is a cantaora and encourages a performance at the end of the year at the young age of 10 years.

Later, a process of artistic development began as a member of the Cádiz company Carmen Guerrero representing Spain and her native city, Cádiz, performing in various folklore festivals in France, Italy, Syria and Portugal.

She won the Cante Libre Prize in the Tientos de Cádiz competition and was born with the cantaor Nano de Jerez an artistic commitment as a cantaora that she still maintains today.

In her short career she has traveled to various American and Mexican cities with different organizations such as Casa Flamenca, which is based in Albuquerque (New Mexico) and Casa Patas (Madrid).

In 2015 she made her own show as a soloist in the theater play “Tributo a Mariana“, which premiered at the Teatro Moderno in Chiclana, including the Festival La Isla Flamenca in San Fernando (Cádiz), Festival En Off de la Guarida del Ángel (Jerez) and at the La Central Lechera theater (Cádiz).

In 2017 she immersed herself in her first album called “Rincón de la alegría“, which comes to light at the end of August.

At the moment she is giving her best in her representations by different tablaos of Madrid, Las Carboneras included, and Barcelona and in the promotion of the “Rincón de la alegría”.