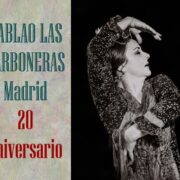 «About who would I highlight about my artistic training, I have had many wonderful flamenco teachers with whom I have learned many things, but I, on this occasion, would like to highlight my mother, Pilar Sánchez, who was the one who taught me classical dance and bolera school. She taught me a very strong classical ground that later has served me in my profession for many things that I have done in flamenco and with my company, Arrieritos, in which we met different languages ​​within dance. She also taught me discipline, to love dance and to be on stage since I was little. It was a very nice apprenticeship and every year we walked on stages from a very young age. So, I would highlight my mother because it is always true that discipline is instilled in you from a young age, and the love for dance and respect for teachers.

»I spent two intermittent years in Mexico and, when I went back the year 92, the first most important thing I did was in the Sala Caracol with Belén Maya clapping and dancing. There they saw me dance and, two or three days later, one day I was at home and my boyfriend told me: “Antonio Canales is calling you on the phone.” I was washing clothes by hand because I didn’t have a washing machine, I was washing my dance clothes in the bathtub, there raca, raca. I thought it was a joke and he insisted that I get on. I got on the phone and I was dead, at that time there were no mobiles and there was nothing. And he told me if I wanted to join the company, that the following week we were going to Canada. And in a week I had to learn all the repertoire that they carried. I almost die. Of course, at that time Antonio Canales was booming and for me it was, you know, wonderful. It is an anecdote that I have very recorded, but above all the fact of being washing clothes in the bathtub and not believing it. 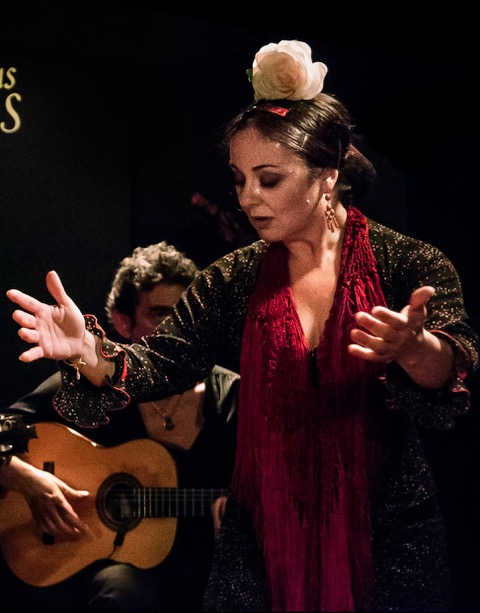 »For me dancing in a tablao is, first, therapeutic. Second, you enter such a state of meditation, due to the level of improvisation that there is and the concentration that you have to have, as well as the communication between colleagues and teamwork, which is wonderful. It’s like meditating and, at the same time, I feel free and there is uncertainty, there are many sensations at the same time. The uncertainty of not knowing what is going to happen, the wonder of the energies, how they flow, some days very well and other days they flow very badly, but it is the uncertainty that causes you. Then freedom. Above all, that, which for me is very therapeutic and enriching.

»Las Carboneras. It is one of the most important tablaos in Madrid, I would place it among the top three most important in Madrid, where the artists feel very comfortable and where we have created a very personal way of deconstructing the dances. We have created like a school, on an artistic level. Later, many tablaos have joined us, for example at the beginning in terms of schedules. Now we have joined them because they make the passes even earlier, times change. But our tablao was like a revolution. And it is one of the tablaos in which we maintain the tradition that existed in Madrid of singing the jaleos, although now we make them more modern and musicalized, before they were sung without a guitar. It is a tradition of the tablaos of Madrid and we are the only one which maintains it. And I think that for artists it is very important to come to Las Carboneras, apart from how good they feel ».