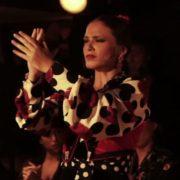 Salomé Ramírez begins to dance together with Rafael Muñoz at 4 years of age forming part of the young promises of flamenco Huella Jerezana (1994-1998).

In 1998, at the age of 8, she continues her training at the academy of Manuela Carpio and Chiqui de Jerez, and continues to complement her training with teachers such as Farruquito, Antonio Canales, Juana Amaya, Marco Flores, José Maya, Manuel Liñán, Farru, Patricia Guerrero , Rocío Molina, La Moneta, etc.

In 2002, when she was 12 years old, she started working at the tablao El Lagar de Tío Parrilla, directed by Juan Parrilla, in Jerez de la Frontera. She began to dance in other tablaos from Jerez, such as Tablao del Bereber, La Cuna del Flamenco or La Taberna Flamenca.

In 2007 she participated in the Viernes Flamencos of Jerez de la Frontera.

In 2010 she was part of the company of Farruquito with the show “Sonerías” premiered at the Teatro de la Maestranza at the Bienal de Flamenco of Sevilla.

From 2012 until today she began to be part of the usual artists cast of Tablao del Carmen in Barcelona.

She has also performed in flamenco tablaos in Sevilla such as El Museo del Flamenco by Cristina Hoyos, El Arenal and Los Gallos.

From 2014 until today she is part of the cast of flamenco tablao Puro Arte in Jerez. In that same year she returns to participate in the festival Viernes Flamenco of that same city and makes her first tour in Japan performing and teaching classes in different cities like Tokyo, Osaka, Sendai or Nagoya.

In 2015 she participates in the flamenco festival of Lyon with the show “De Lebrija a Jerez” with the singer from Lebrija Anabel Valencia.

In 2016 she obtains the second prize of the flamenco dance contest of the Tablao Las Carboneras in Madrid.

In 2017 she goes to the world music festival of Copenhagen, Denmark.
She currently lives in Madrid forming part of prestigious tablaos such as Las Carboneras, Cardamomo or La Pacheca, among others.

“The tablao for me is a very special place. I feel very comfortable on stage and it is always a pleasure to share with colleagues of an exceptional level. And below it, it is a family where you can breathe affection and a lot of art », explains Salomé Ramírez.