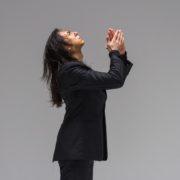 Young bailaor born in a gypsy family of artists: painters, actors and writers. His ancestors are the historic bailaora Fernanda Romero and the cantaor Rafael Romero “El Gallina”. He is also related to the famous painters Antonio Maya and Jerónimo Maya. He began his career as a bailaor with nine years of age sharing a billboard in Madrid with dancers such as Antonio Canales, Juan Ramírez and Joaquín Grilo.

With only thirteen years he is already part of the companies of “El Güito” and Manolete doing various tours around Spain. In 1998 he obtained the Copa Pavón award and participates as guest artist in the show “Raíces” by Antonio Canales.

In 2005 he is claimed by the French filmmaker Tony Gatlif to be the first dancer of “Vertiges“, doing an extensive tour of France and Italy. Since 2007 he is a member of the guitarist Tomatito’s sextet touring Europe, America, China, Russia and Japan. Premieres with Farruco and Barullo “Al natural“, a flamenco musical acting for a month at the Theater Alcalá of Madrid and presented at the Jerez festival.

That same year he is invited by the producer Pino Sagliocco to dance in the concerts of pop stars like Marc Anthony and Beyónce with whom he performes in the Palacio de los Deportes de Madrid and at the Palau Sant Jordi in Barcelona.

In 2008 he presents “El velero de las rosas” together with Lola Greco as guest artist, premiered in the Corral de Comedias of Alcalá de Henares in the Suma Flamenca Festival and in the Veranos de la Villa in the Sabatini Gardens.

In 2010 he premiered “Grito” with Alfonso Losa premiered at the festival Flamenco in Torrelodones, represented at the Suma Flamenca festival and in the Teatro Central of Seville within the framework of the programming of the Seville Biennial 2010.

In 2011 he presents “Maya” at the Flamenco Festival of Jerez, receiving a great reception on the part of the critic. He toured the USA and Canada with the show “Tengo compás” represented at the Albuquerque International Festival, in New York’s Skirball Center, Marines Memorial Theater of San Francisco and at the International Percussion Festival of Montreal.

In 2012 he presents his show at the Flamenco Festival of La Villette of Paris. In 2013 he participated in the tribute show “Carmen Amaya en la memoria” with Pastora Galván, Karime Amaya and Gema Moneo. In 2014 he premiered his latest creation at the Le Palace theater in Paris “Latente“.