She began classical dance studies at the age of four in a school in her hometown, El Puerto de Santa María (Cádiz). Later on she joined the professional dance conservatory of Cádiz where she completed her intermediate studies in classical and contemporary dance. When she was 17, she began to study flamenco with Natalia Acosta. Soon she was trained with fundamental teachers in her career such as La Lupi and Mercedes Ruiz. At the same time she finishes her higher studies of flamenco dance at the Superior Dance Conservatory of Málaga in the specialty of choreography. She expands her training with teachers such as Yolanda Heredia, Alfonso Losa, Belén López and David Paniagua, among others.

She has been part of companies such as Mercedes Ruiz in the shows “Juncá” and “Tauromagia”; in Juan de Juan’s with “Los sones negros”; the company of Carlos Saura, with “Flamenco hoy”, or that of Rafael Amargo, with “Dionisio. La vid… y mil noches.” She also acts with her family in the show “Casa Ruibal”.

She currently works in different tablaos in Madrid, including Las Carboneras. In 2016 she won the first prize of the IV Villarosa tablao competition. 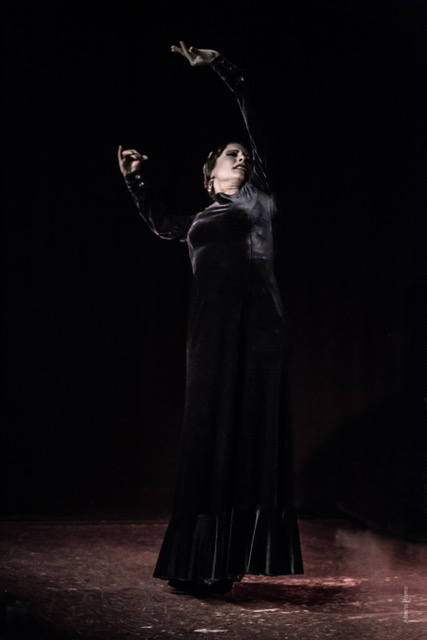 “For me, the tablao is the daily reward”

»I have many anecdotes and most of them are fatal, but perhaps one of the ones that I remember the most was one of the first times I was going to dance. I was going with Mercedes, who had just started studying with her and told me to enter a contest to have the opportunity to dance. I remember that we went to a contest in a town in the Sierra de Granada, which was in a place that took us the same life to arrive and was one of the first times where I danced in public. I remember when I was going to dance, in the first letter of the seguiriya I was going to do, I suddenly started to feel like the floor was falling. With the nerves I had, I did not understand very well what was happening. I kept looking down because I felt the planks were falling. I was losing my balance and then I realized that I had fallen, one of my heels had broken and I was at the other end of the stage. The first, on the forehead, as soon as you start dancing. I had to deal with it and I don’t remember very well how I solved it, but I know that in the end I finished the dance. And I grabbed my heel, dying with shame, and greeted the audience with the heel in my hand. And again back to El Puerto de Santa María. That is an anecdote, among many others, but I am ashamed to share them.

»The tablao for me is the day to day, the daily effort and, above all, also the daily reward. I think it’s a bit like learning that you start from scratch every day. It reminds me a bit of getting up in the morning, there is the bailaor meeting daily. And knowing the others. I think those tablao moments have a lot of authenticity because that is when one really is improvising and is not under the guidelines of something staged, in a show with a choreography in which we are focused on telling something. But in the tablao we are simply transmitting what the guitarist or singer is making us feel, as well as our own colleagues. For me that is the tablao.

»And a before and after in my career was coming to Madrid. Because I think if I hadn’t come to Madrid I wouldn’t have ultimately become a dancer. It was at the moment that I put myself to the test and had to discover what it was really like to be a dancer, to be in the profession with a lot of colleagues. Anyway, I certainly think that was it ».