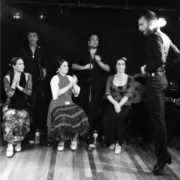 Born in Arcos de la Frontera, 1981. Is a dancer and choreographer of flamenco and Spanish dance. Among the various awards received, he stands out as winner of the Concurso Nacional de Arte Flamenco, en 2007 of Córdoba. Throughout his career he has worked with artists like Olga Pericet, Sara Baras, Rafaela Carrasco, Mercedes Ruiz, Manuel Liñán or Daniel Doña. Since 2010, he runs his own dance company, Cia Marco Flores, with three productions: “DeFlamencas,” “Tránsito” and “Laberíntica”.

During his childhood, he developed a deep relationship with flamenco that led him to become interested in dance since his teens. His early years learning were self-taught, although he supplemented his training with Antonio Canales and Javier Latorre, taking some of his intensive courses.

At 18 he began working in tablaos, allowing him to consolidate his learning. In 2000 he began a period of two years in which he worked for different companies: first for Sara Baras and then with Rafaela Carrasco. During this period, he also worked as a guest artist in the company of Miguel Ángel Berna and in Mercedes Ruiz’s.

From 2003, he began his career as co-director and co-producer of his own shows with Manuel Liñán ( “Dos en Compañía”), Manuel and Olga Pericet ( “En sus trece”, “En clave”) or Olga and Daniel Doña ( “Chanta la mui”, “Complot”, “Recital”). For more than six years they presented their joint projects.

In 2010 he creates his own company. Cia Marco Flores unveils his first show, “DeFlamencas” that year in the Gran Teatro de Córdoba. “DeFlamencas” gets the prize of the critics at the Festival de Jerez 2012.

It is also in 2012 when the company presents its second production, “Transit” at the Canal Theatre of Madrid, during the Festival Suma Flamenca. With “Transit” they turned both Spain and Europe (Germany, Sweden, etc).

His next big production was called “Laberíntica” and was premiered at the Teatro Cervantes, as part of the Biennial of Flamenco Art in Málaga. “Laberíntica” was also presented in March 2014 at the Villamarta Theatre during the Jerez Festival 2014. “Laberíntica” has also been presented at major international festivals such as the Kuopio Dance Festival in Finland.

In 2015, the company premiered the show “Paso a Dos”, starring Marco himself and prestigious dancer Olga Pericet, winner of the Ojo Crítico Award 2014 and 2015 Max Award for best leading dancer.

In 2015 he choreographed the Ballet Nacional de España in its production called “Alento y Zaguán.” In 2016, he premiered his production “Enter the Game” at the XX Festival de Jerez, where he has guest artists such as Carmela Greco and Alejandro Granados. This show was touring the United States in 2017, going through festivals such as the Albuquerque Flamenco Festival.

That same year, the company premiered its show “Alternate Phase” at the Teatros del Canal de Madrid. This production will be spinning during 2018 and 2019, passing through important places such as the Madrid International Festival in Dance or the Festival de Jerez.

In 2018, he premiered his first piece for unconventional spaces: “Extract open”. The piece has been selected to rotate within the festival network ACieloAbierto. In addition, recently the first single by Flores was also premiered, “Extrema”, appearing in different theaters and festivals in Asia and Europe.

Currently, Marco travels around the world with his company, presenting his shows. He also continues to choreograph and collaborate with different artists and companies. In 2016 he has choreographed for the Daniel Doña Company, and also for the National Ballet of Spain in his production called “Alento y zaguán”. He has also recently choreographed in the last shows of Olga Pericet, Jose Manuel Álvarez, Conservatiorio Profesional Fortea, among others. Throughout his career he has performed several times in various tablaos, including Las Caboneras.