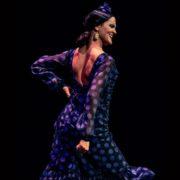 In 2004 she created Estuaria, a company that she currently manages. With which it has become known in various national and international scenarios.

Her solo career was recognized with the first prize of the First Young Flamenco Contest, organized by the Diputación of Granada.

In company, Estuaria have been semifinalists of the Choreographic Contest of Spanish Dance and Flamenco of the Community of Madrid with the piece “Triangular“, which gives name to its second show.