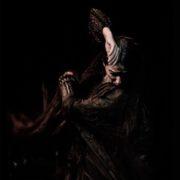 Stage director of the “Bodegón” shows, by the dancer and choreographer José Maldonado, premiered at Les Nuits FIamencas de Chateauvallon 2016 with the participation of Antonio Canales and Carmen Angulo as guest artists; “Ver, oír y bailar” by bailaor Francisco Hidalgo, premiered in 2017 and “La decisión”, by bailaora Laura González, also premiered that year.

Under the direction of Carlos Chamorro she is part of the company Malucos Danza working as a choreographer and dancer, participating in the shows “Lorca

Participates as a soloist in the show “Dressed to Dance” at the Tchaikovsky Concert Hall in Moscow (2012) and in The Israel Festival in Jerusalem (2013) directed by Carlos Chamorro and produced by Margaret Jova.

Member of the Roni & Kaari Martin Company, she is a creator and soloist in the shows “Pippi Long Stockings”, “Flamenco trilogía” and “Kill Carmen” and the solos “El cuervo y el reloj” and “La femme rouge” from 2009 to the present.

In collaboration with the Casa Patas Foundation creates the show “Berimbol” (2013) at the Cultural Festival of Assilah and “Flamenco(s) de plomo y cobre” (2014) in Miami, Washington, Seattle and Olympia with the special collaboration of the choreographer and dancer Carlos Chamorro.

Jury at the XII International Flamenco Festival of Moscow (2013) together with Carlos Chamorro, Karen Lugo, Natalia Zaikova and Urbano Millán.

Participates in the XIII Bienal de Flamenco de Sevilla (2004), with the Andalusian Dance Center under the direction of Cristina Hoyos in the show “Los caminos de Lorca”.