Jimena de la Frontera (Cádiz), 1985. She started dancing at the age of 10 in various dance academies in Campo de Gibraltar, since she was 17 until she moved to Granada. She continues her training with Luis de Luis and Stella Arauzo.
A year later she decides to settle in Seville, where she now lives, to study at the Fundación de Arte Flamenco Cristina Heeren with teachers as Milagros Mengíbar, Rafael Campallo or Carmen Ledesma. For two years is a scholarship from the foundation, serving as instructor.
At the same time she pursues her training with several teachers such as Andrés Peña, Eva Yerbabuena, Rubén Olmo, and Andrés Marín.
Currently she can be seen in flamenco shows in Las Carboneras, El Arenal, Los Gallos, El Museo del Baile Cristina Hoyos, and Auditorio Alvarez Quintero of Sevilla.
She managed to get the first prize El Desplante in 51st Flamenco Dance Contest La Union, Cante de las Minas 2011.
She has also got the first prize for young artists of the Federation of Flamenco of Sevilla 2009 and the first prize Aniya “La Gitana” of Ronda, 2007.
In June 2011 she participated in the first Flamenco Festival Tokyo and sharing the stage with artists like Farruquito, “La Moneta”, and Olga Pericet or Enrique “El Extremeño.”
She was part of the company of Felipe Mato, who debuts in 2009 with “Calle Sierpes” in Festival of Mont de Marsan, Festival Flamenco of Dusseldorf 2010 and also in Saint Tropez, France.
She has done collaborations of feet in discs “Cuando Lebrijano canta, se moja el agua” by Juan Peña “El Lebrijano” and ” Rosa de los vientos” by Juan Ramón Caro.
She has performed in the circuit of Diputación de Sevilla in 2009 and 2010, as well as in the circuits Peñas de Guardia of the Federation of Peñas of Sevilla in 2008 and 2009.
She has made several tours abroad in places like Ecuador, St. Petersburg, Indonesia, Lebanon, London, Holland, Belgium and Kenya. In the latter she made a collaboration with Garden Opera in London within the show “Carmen.”
In 2012 presented her first solo show is the sixteenth edition of the Festival de Jerez. 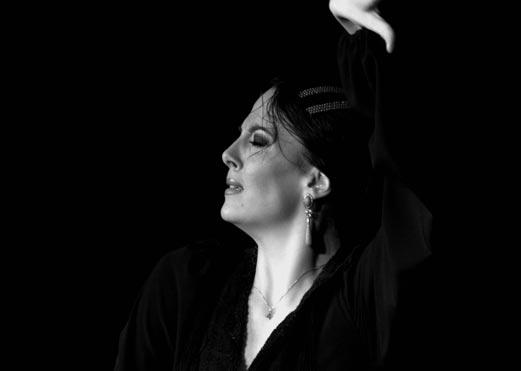 “For me, after having attended traditional academies, when I arrived at the Cristina Heeren Foundation in Seville it was a very important change in me because, beyond the teachers who I had, who were teachers who were good, like Milagros Mengíbar, Carmen Ledesma or Rafael Campallo, beyond that it was the first time that I was so many hours dedicated to the dance. It was every day, a lot of hours, and it was a big physical and mental change. I haved just realized that I did not have a teacher, I had many, I learned from many people, but I do not have a person who I’d say: this is my teacher. I can say that I learned a lot from Andrés Peña, in a certain time, because I studied with him at a time when I was a sponge and I was very green. Besides, he is a great bailaor and he knows how to teach very well to dance. Besides steps and choreography, he knows how to teach dancing very well and I feel he taught me a lot. I also learned a lot from Andrés Marín. I learned a lot from a lot of people, but I do not feel I had a teacher.
“Then, where I think I learned it was in my first tablao, in El Arenal. I learned a lot being on the stage, to have to get the numbers done without being mature yet. And you see a partner and another, from the way of being in a dressing room to the way to go out on stage, to make up, to behave. I learned that by working. For me, to work in the tablaos I think it’s the most important thing. I could highlight people I worked with and it was important to my career, but I think that the thing is to work in different places. Not only in tablaos or in theaters, not just solo or dance body. For me it is a luxury to be able to work in theaters and in a company and at the same time to be in the tablaos. In large spaces, small, with people with whom you have affinity and with which not, one day you feel like dancing and another day that you do not. For me that is learning to dance. I love working in the tablaos because it’s a very close and real flamenco, because it’s the moment. And in a tablao like Las Carboneras I love it because I feel that there is a lot of freedom, you can be who you are, you can propose the things you want to do and are usually welcome and then I usually meet people of my artistic and personal taste. For all that ».