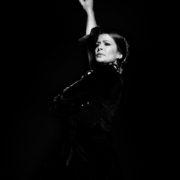 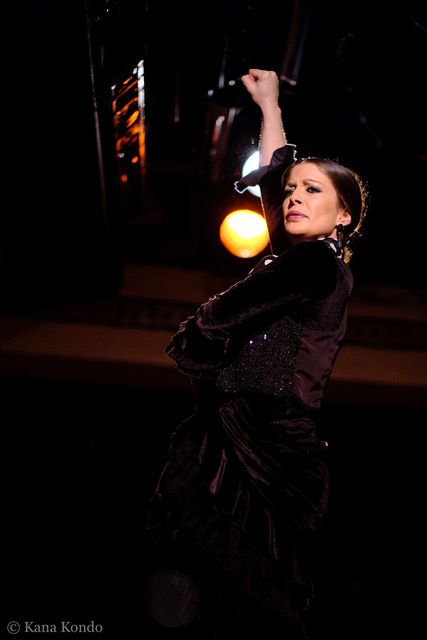 Born in 1989 in Málaga. She began her studies in the flamenco school of Susana Lupiáñez “La Lupi” (2001-2013). She has a degree in Choreography and Interpretation of flamenco dancing at the Superior Dance Conservatory of Málaga in 2011. She continues as a student of the Flamenco Cante School of the Federation of Peñas Flamencas de Málaga for three years (2008-2011), with the teachers Virginia Gámez (cante), Curro de María (toque) and Susana Lupiáñez “La Lupi” (dance). 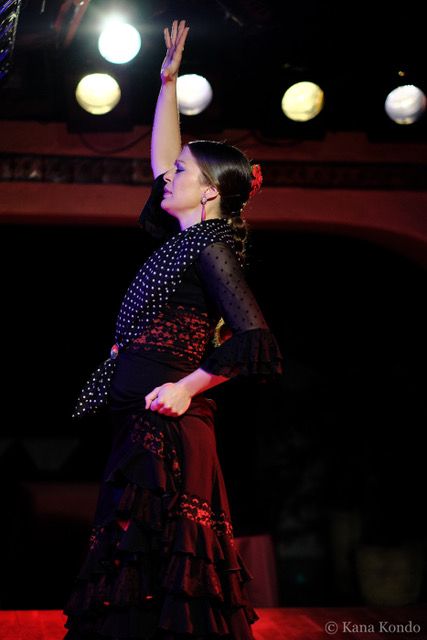 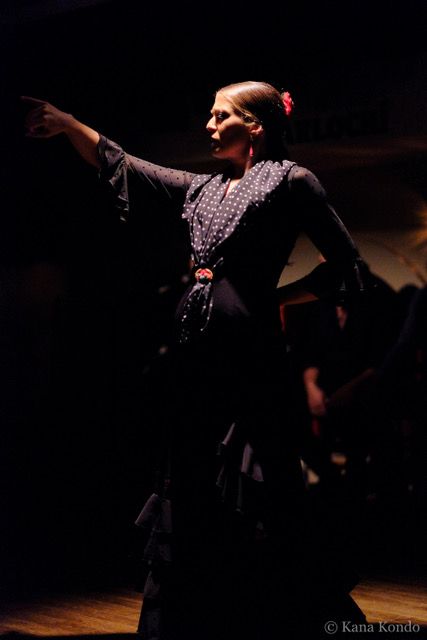 She received the first prize in the competition for young flamencos of the Federation of Peñas Flamencas of Málaga (2011). 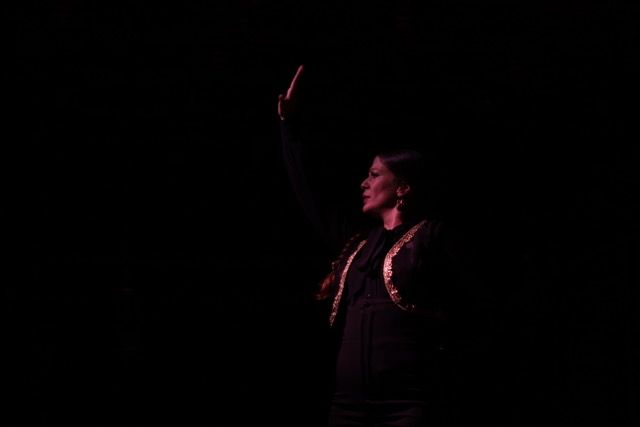 She was awarded the second prize in the Tablao Villa Rosa competition, Madrid (July 2012). 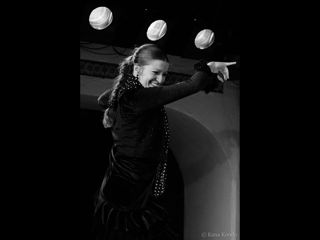 She was semifinalist of the prestigious contest of the Festival de Cante de Las Minas de la Unión. 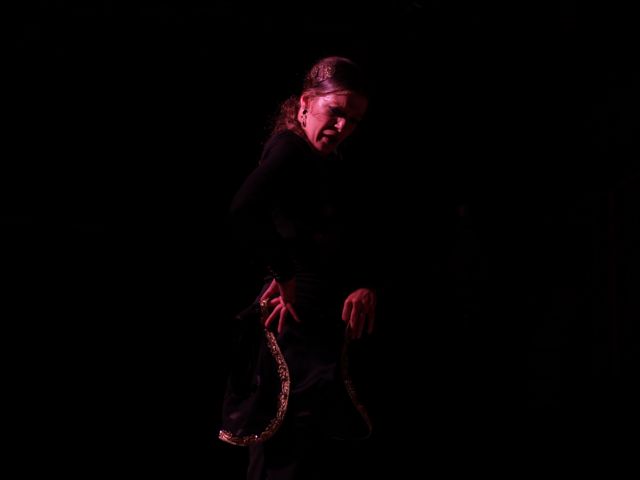 She was a member of the flamenco company Susana Lupiáñez “La Lupi”, performing in various galas in Europe with the shows “7 historias hacen una vida” and “Carmen” by Bizet (2009-2011). 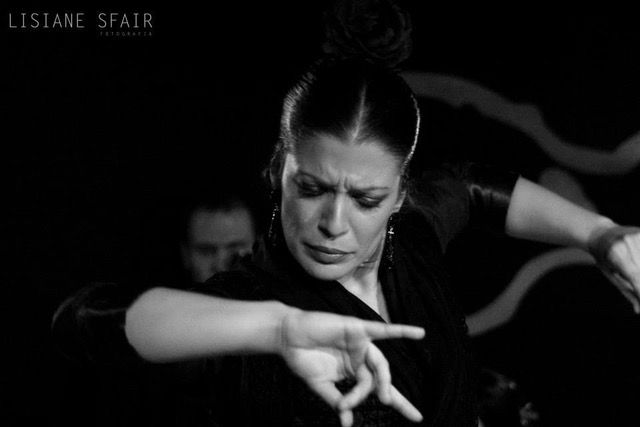 She was also a component of the Cía. Juan de Juan in the show “Sones negros” at the Festival Veranos de la Villa in the Jardines de Sabatini, Madrid (July 2014).

She was part of the Cía. José Porcel in the show “Moralejas” in Tel Aviv (September 2014) and in the tour of the United States with the show “Flamenco Fire” (September, October and November 2015).

She has been a flamenco dancer of the tablao Garlochí, Tokyo (Japan) (May-August 2017). At the moment she is a component of the flamenco picture of diverse tablaos of the capital like Villa Rosa, Las Carboneras, Cardamomo, Cantares, Las Tablas, La Estación de los Porches.

«For me, dancing in a tablao is the truest way to express yourself»

«About my training, I’d like to tell an anecdote that happened when I was four years old. I went to live with my grandmother and I as a girl was very hyperactive, very nervous. Then there was a dance academy in the neighborhood and my grandmother inscribed me to burn a little energy and therefore to go to sleep more calmly. There I was like three years or something like that, until seven. At that time we moved to other neighborhood and my mother inscribed me to the extracurricular dance activity in my school. There I met a boy who was at school too and he also danced, and the years went by and we danced together at school and in different places. At 10 or 11 years old he had started his training at the conservatory, since he was two years older than me. He appeared himself one day in my house and talked with my mother, as if he were a big boy, a man. He told my mother that he saw that I had a lot of talent and that he wanted me to go to the dance with him at the conservatory and at another academy where he had taken classes. My mother spoke with his and inscribed me in the new academy and in the conservatory. When I arrived at the academy, it was the one where I was at four years old, but now ran by Susana Lupiáñez, “La Lupi”, who has always been my teacher. Let’s say that I went back to the same place where as a girl my grandmother inscribed me by chance. And there I followed all my training until I came to Madrid.

»I will tell you the first thing I did at a professional level. The first time I went to a tablao was in my land, in Málaga, at 16 or 17 years old. My teacher called me because they needed a girl in one place, and I showed up at the tablao. I had no idea what the move was, I arrived with a super nice dress, very neat, with my hairstyle very well done, my hair bun with hairnet, all very well, as if I were going to do a test of conservatory. I did not have much idea. Then I was in the dressing room and the girls who were there, who were not so small and were rather ladies, 30 or 40 years old, had the feeling with me of this girl who she is and where she comes from? It was super funny because one of the dancers came into the dressing room and, without even saying hello, looked me up and down and asked me “who are you?”. And I was very shy, very embarrassed, and said “Hi, I’m Marina Perea and I’m a student of Lupi, who has spoken with the head of the tablao”. And directly, without saying a word, the first thing he does is give me rhythm by bulerías with her palms and she says: “Let’s see what you can do!”. Obviously, I was doing a test access to the tablao, I was doing a test to see how far I could go, to see if I danced on rhythm or not, if I had no idea or had a little. Antway that, when I saw myself in that position, with that girl touching me palms and I with the face unhinged, my first day with my hair netting on, thank goodness I had a little bit of lucidity and I pop up and said: “Yes, make me palms that I want to see if I have well squared a little step for bulerías that I have made up this morning. ” I got the best kick I had, my best resource, the one I had sound and firm, and I made it in the dressing room. He told me: “Okay, okay, it’s okay.” He gave me the consent to sit on the stool next to her. That would be my anecdote.

»For me, dancing in a tablao means being able to dance in the freest way you can feel, since there is no established choreography, you do not know what is going to happen and there are many factors that influence you and the rest of the group. First, the emotional factor, how you are emotionally and also how your partners are. So, for me to dance in a tablao is the truest way to express yourself. For me that it actually means everything because I like to move in life with the absolute truth at the level of emotions and express yourself as you feel and tell who you are and how you see life through your way of dancing, truer and with total freedom. Obviously, there are some codes and we all have some resources, but improvisation and intuition help you to take that path. And then also, in an artistic way, taking aside the emotional and existential part of what it means to dance, in an artistic way the tablao wears you, makes you put your batteries and wake up. There, too, one draws from himself all the capacity he has to adapt quickly to things, to all the changes that arise, from the support of colleagues, to work and control one’s energy … Then, in artistic matter, that puts you batteries and makes you grow a lot. I, since I arrived in Madrid eight years ago, it was something that I wanted and yearned (in a beautiful way) to be able to dance in a tablao. Because I knew that it was really where I was going to know what flamenco was, the flamenco dance, from its origin. Obviously everything has evolved, but that remains the absolute truth and what flamenco really is. For me it is essential in the career of a flamenco artist to go through the tablao, of course. Going through the tablao and not to pass by but living in the tablao although you do many other things, but live in the tablao and keep it in mind throughout your career, of course”.