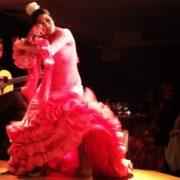 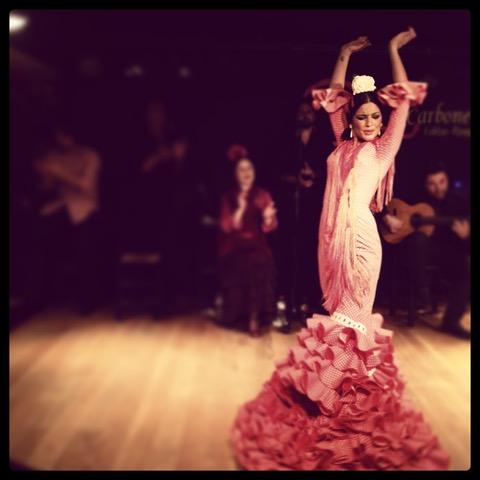 Performance at the commemorative festival of Andalusia in Toulouse, 1998. Participation as a dancer in the charity Alzheimer’s festival, Córdoba.

Performance with the show “Arabian Nights”, Teatro La Latina Madrid, next to Miguel Toleo, in November 2003.

Acting as a dancer in the opera “Carmen” at the Olympic Stadium in Seoul (South Korea), 2004.

Japan tour with the company Domingo Ortega, 2004. She later works in this company participating in the show “Orfeo”.

Show at Festival Gorbiu, France, as a soloist in August 2007. 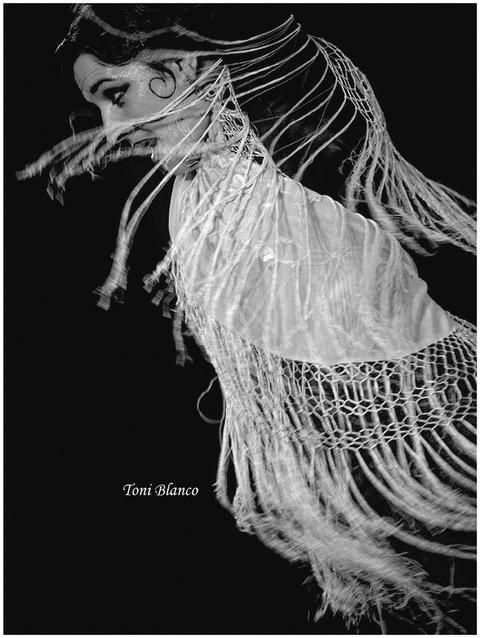 Participation as a soloist in the show “El emigrante” by Manuel Gutiérrez in the flamenco festival in Nimes (France), 2008.

Three-month contract with the company from Paris “Flamenco Flamenk’a” at the Lyric Theatre in London, 2008.

Six-month contract in the tablao “El Flamenco” in Tokyo (Japan) dancing and lecturing (2009).

Award as a finalist for the National Flamenco Art of Córdoba, 2010. 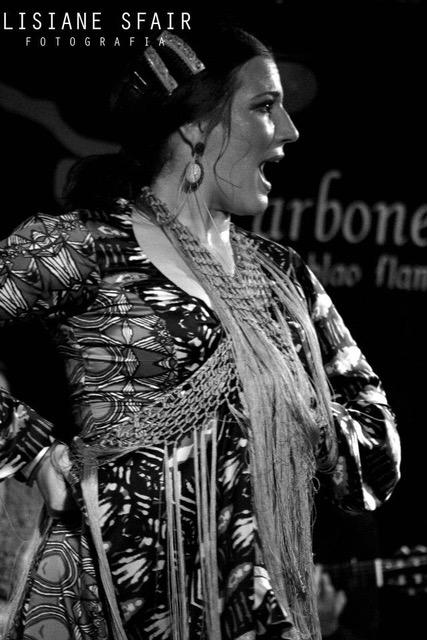 Tour of two and half months by the US as first dancer in the company José Porcel.

She collaborates as a dancer in the show David Paniagua “Mi alma” in the Netherlands, 2012.

Suma Flamenca Prize in the Contest of Choreography of Spanish and Flamenco Dance in Madrid, 2012.

Collaboration as a soloist in the show “Sinergia” by Manuel Liñán in Atlanta (Georgia, USA), 2013.

Collaboration as a soloist in the show “Depende del momento” by David Paniagua, 2013. 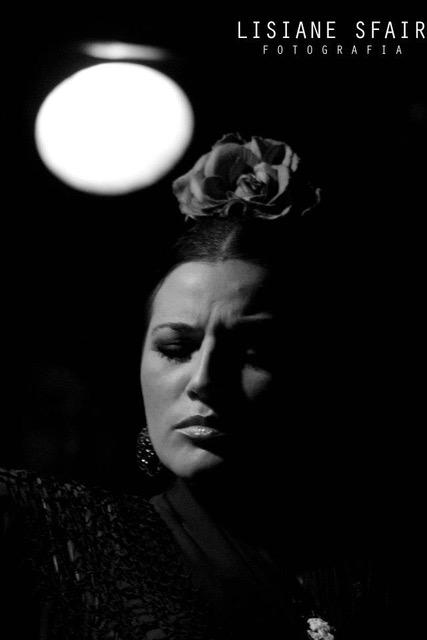 Soloist in the company of José Porcel with the shows “Con la que está cayendo” and “Arte”, 2013.

Since early 2013 she teaches at the School of Amor de Dios of Madrid.

Since 2014, she works in the company of Manuel Liñán with the show “Nómada”. She has performed at various events such as the Festival de Jerez, the Bienal of Sevilla, Madrid en Dance, Flamenco Festival London, Flamenco Festival New York and Miami. 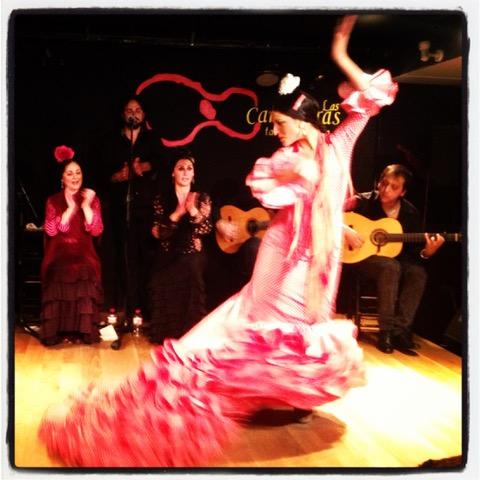 «For me, the tablao is practically my life»

«The passion for flamenco came to me from my father, who was a great fan of this art and he was who introduced me to this world. Since I was a little girl I always listened to flamenco and I played the discography of the great singers and guitarists. He took me to all the festivals, to all the places where there was flamenco in my land. Then, I began to be very interested in dancing, they signed me up to a neighborhood academy and later, with nine years old, seeing that I still liked it and spent hours and spent time, they introduced me to the conservatory tests, I entered and there was my training for ten years. Apart from the conservatory, I was training with all the courses that came to Córdoba or those that I was learning in Sevilla and had the possibility of doing them. Therefore, I trained with the professors of the conservatory, the private academy and the professors and great artists who came to give courses and to the festivals of Córdoba and Sevilla, which were the closest cities. A conservatory teacher, Estrella Muñiz, who was very good at classical, one day she said something to me, seeing that I liked flamenco, stylization, the Bolera School, but I had a hard time performing classical dance, putting me in a bar gave me lazyness, to tell you the

truth. One day she took me out of the bar, sat me down and said: “Today you are not going to teach because if you do what you are doing, you better stay at home watching TV.” That hurt me so much, so much in self-esteem that I charged the batteries and I remembered that phrase every day. And, in the end, I finished my classical class with a 9, and had no qualities for the classical, but I made it based on effort. By that I mean that one of the teachers, thanks to the one I am eating today from the dance, was she, who opened my mind and told me if you want to do this, get on the bar and work. And if not, stay at home, this is hard. That was an anecdote and another was that, with 14 years or so, my parents had no financial possibilities to pay me many things that I needed to train or to come to Madrid. Then, there was a trip that we wanted to do all the classmates and I didn’t have a dime, you know. Then we came up with the idea that, before entering the conservatory at 4 pm, when we left the institute we would plant our flower in our hair and put on the uniform of the conservatory and go to the mosque to dance in the street. We put the Cordoba hat to collect money at will. To our surprise, since  we did it as a joke, to have a good time, and when we realized that we had                 there a lot of people watching us and, when we went to count the money, our eyes were nuts and there we were every day. We decided to be always there, which was two or three months, until the teachers of the conservatory caught us and called our parents and told us that this could not be done. That, as a funny note, that even parents and teachers laughed a lot.

»About my professional career, later on, when I finished the studies, I started working in Córdoba in some tablaos that were there and in the festivals of the towns until I decided to come to Madrid. I can say that the base was acquired in Córdoba but as an artist and dancer I have grown up here in Madrid. I have trained in tablaos seeing many good companions, observing a lot, and training in classes with everyone I could and in the companies I have been with and always learning. I started working on tablaos in Madrid and with Domingo Ortega in the company. And if there was and audition, there I was. I was with Antonio Márquez, Carlos Vilán, with Manolillo (Manuel Liñán), Jesús Carmona, David Paniagua. And in all the companies in which I have been able to intervene as a dance body or as a soloist I have been learning a lot. I have also been teaching courses outside and that has been one of the parts of my life that have marked my career. The six months I was in Japan, I charged the batteries there a lot because it was a time when I was always watching and learning everything that I worked with. And yet, the time of Japan was to get myself alone, observe myself, look in the mirror, make my own personality and find myself, seek my truth. And the same technically. That’s where I started to discover myself as a solo dancer. When I was back, I continued in the tablaos, I appeared in the Suma Flamenca, I appeared in competitions and I took the third prize of La Perla de Cádiz, I was a finalist in La Unión and in the national contest of Córdoba. It was a year full of learning and emotions and the one that most marked my professional career. So far, there I am. I share the dance on stage with pedagogy, with teaching, which I also like quite a lot.

»For me the tablao it is practically my life. Well, half of my life. The other half are my children and my house and my family. Yes that is half of my life, for me the tablao is freedom, it is true, it is improvisation, it is magic, knowing how to enjoy the companions day by day. Knowing how to accompany them, apart from dancing, and accompanying you. From the tablao I emphasize how to be behind and accompany the one who is dancing in front, admire what you have in front of you and enjoy that. What I like most about tablao is that you never know what you’re going to find or what’s going to happen. One day you share with some colleagues, another with others, one day you have more feeling with the guitar or with the singing, there are days that not so much. But, you know, what I have achieved with all these years and experiences is to get carried away by what moves and motivates me today. There are days that more and less, but there is always something nice that is born when you listen to a guitar or a song. Of course, the dressing room moment I love too. In the end it is a way of life and being in the tablao and living it. For me, tablao is truth and freedom of expression ».