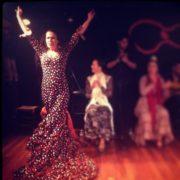 Guadalupe Torres was born in Madrid in 1983 and is a rising value of the current flamenco. She is graduated in Spanish dance and flamenco by the Real Professional Conservatory of Dance of Madrid and in her formation emphasizes important masters of flamenco.

Her professional career began at Compañía Andaluza de Danza and then went on to other companies such as Maria Pagés or Marco Flores in “De flamencas” awarded the best show at the Festival de Jerez. That was followed by different solo projects highlighting “Acuérdate cuando entonces”, taken to the Biennial of Holland, Helsinki Festival or Festival de Jerez, and her latest proposal, “Roble” , with great acceptance, that has passed through the Milano Flamenco Festival, Jornadas Flamencas, Red de Teatros or the Flamenco Festival Madrid. Her personality makes artists of different generations like Marco Flores, El Güito or Montse Cortés count on her in different collaborations for her versatility and freshness.

She has been awarded twice in the prestigious Certamen Coreográfico de Madrid for the best choreography as a group piece with “A miedos, colores” and with the piece soloist “De los rincones”.

She combines her professional career with teaching classes and courses in Spain and countries like Japan, Brazil, Argentina, Italy or China. And being invited as teacher and choreographer in the Superior Conservatory of Dance of Madrid.

“The tablao is like eating,” says the Madrid artist

As for my training, one of the things that has given my dance openness and versatility is the fact of coming from a training in conservatory where I have studied classical and Spanish dance. All this, combined with the classes I took also in Amor de Dios with people from flamenco has been a base to give a little more amplitude to my dance. Also, having studied with teachers in Madrid and Seville has also defined my style, studying with many different teachers and different styles.

From the professional side, I also emphasize that I started working very young at companies such as Compañía Andaluza de Danza, María Pagés, Marco Flores and Manuel Liñán, and that path for me has been very important, working in companies and in teams, where there is a work of continuity and daily work.

“That also gave me the ability to then be able to perform my shows and my solo projects, which I currently have two: “Acuérdate cuando entonces” , which is a format of flamenco recital, a more traditional flamenco, say, and then we are also working with “Roble” , which is a more aesthetic proposal and theatrical, and it is still the flamenco that I do and that is already defining me. I have these two proposals, which are very different, apart from the first show I did with Jonathan Miró and David Coria, which was our first experiment as a company and with which we learned a lot and acquired maturity and gave us another vision of doing things and carry out the projects.

“De los rincones”, in which I took Marco Flores as a guest artist, was the first experiment I did in solo. And the two productions we have now are more powerful and have gone to important festivals such as the Biennale of Holland, the Festival de Jerez and the Helsinki Festival, etc.

“This I combine with the faculty, which is an increasingly important facet in my career with many courses outside, or as a guest teacher at the Conservatoire Superior, which I have been to recently.. ”

And then, the part of the tablao, which for me is totally imperative. It’s the part I don’t like the most, say, but it’s a necessary thing in my life. Just as the shows is something you do more sporadically, it takes a process to get to that day and make a bolo, tablao is like eating. The tablao is where I have learned the most, where the real language of flamenco arises between singing, guitar and dance, where improvisation arises, not knowing never what is going to happen and the appearance of wonderful evenings. Or not, too. For me it is the fundamental school of flamenco, if you really want to learn that language, which for me is what it is, and then have more freedom to do other things.

For me the tablao is enjoyment, it is daily learning because every day you learn more, even the worst day you have, too. And the best, enjoy it. In this case, in your house, in el Tablao Las Carboneras , and not for making the ball, is one of the places where perhaps I have learned more because of the concept that you have, by the musicians so good that there are always, like the treasure that you have there of Angel Gabarre, for example. And then, for your concept of how tablao is, how you do the palms, things that make us learn a lot, how you have to sing a jaleo, how you carry your dance and make it more round. And above all, the good atmosphere that there is always in that house. Of course there are also other incredible tablaos.

But to this I have a special affection because I have been going a long time, it was one of the first ones that I went to, but for me it was a wonderful school in the sense that I have learned a lot and I continue learning because every day is an adventure. I highlight the good mood that there is, that makes it possible to work much better, that people have freedom, within an order there is freedom, which for me is one of the most important things for dance, flamenco and music ‘.