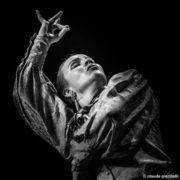 (Cádiz, 1986). At the early age of 5 years she began to receive flamenco lessons. Currently, with more than 10 years of experience, she combines performances in tablaos (such as Las Carboneras), festivals and most important national and international stages. She stands out for a technique acquired thanks to her training and professional career. She has carried out shows with her own signature as her last work, “Hilenco, danza homenaje al amor-arte del Rey del pop Michael Jackson”, a project that the artist is currently developing. 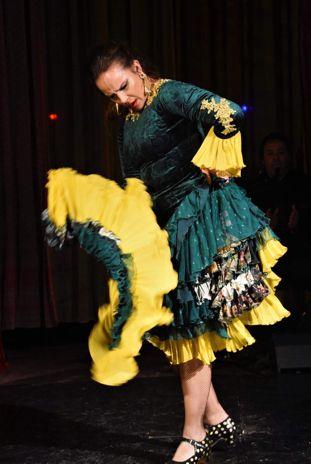 She has shared stages with relevant artists of the scene and is required to teach courses both in Spain and in other countries, among which are Argentina, Uruguay, Costa Rica, the United States, Japan, Luxembourg and the Netherlands.

Throughout her career she has collaborated with artists such as: Antonio and Juana del Pipa, Sara Baras, Marco Flores, Rancapino, Remedios Amaya, Duquende, Niña Pastori and Josemi Carmona, among others. 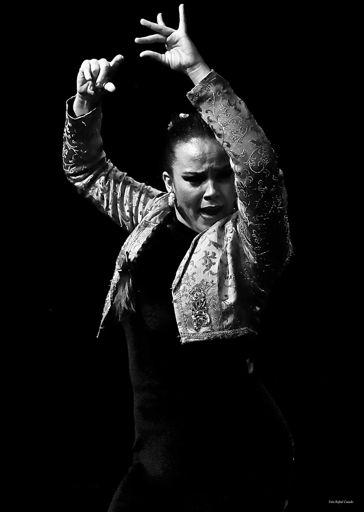 The most important works she has done in recent years are:

Some of her most outstanding creations:

Work for press and advertising:

«I love Las Carboneras tablao, it is a sublime and exquisite house»

«What would I highlight about my learning during my entire career? Well I would highlight the way I have learned, that I think is a bit special and different from what I have seen or heard from other people, who have studied in the typical academy where they teach you this dance or the other. I have had a very special teacher, who had another method of teaching, which has gone very well for me and I have learned a lot. Throughout the time I have also thought that the classes were a little hard for the young students we all were. I started my school learning flamenco with four years old, because in Andalusia extra-school classes are available after school. My teacher taught me a very good foundation, hands, I learned my first tanguillos, alegrías, escobillas, castanets … And then with 9 years old I started with another teacher who really taught me a lot. They were not the typical academies where you can learn the guajira or the soleá por bulería, maybe my teacher in a step spent two months. Each of the teachers took out our personality, we could not compare to a partner to do it. That is what I would highlight about my learning, emphasizing what we feel and what we want to convey with each step and each exercise according to the palo we were learning. After that, it was a lot of thinking and dedicating time, as I was growing up I had my personality settled since I was very small. I have to emphasize that I have learned a lot from all my colleagues with whom I have come together in each period of my life. Everyone learns and takes something out and then you transform it according to your personality, your tastes or according to what you can execute with your body. I have also received some flamenco courses, which have not been many because when some teachers came to Cádiz they were very expensive and my mother could not afford them, or I was small and had no money. And then, when I got older, I did some courses with teachers, of course. But the teaching has been from my first teachers, first my school teacher, who was Lourdes Florido, and then Charo Cruz, who was my second teacher and is the one who has really taught me a lot of things: apart from dancing, the attitude in a stage And of course, the day-to-day teaching, the work and all my colleagues, who have taught me a lot.

»What would I highlight in my career? I would highlight every moment, which is very difficult because there are many of them already, and everything that I have left if God wants, that I hope will be many years that I can live of art and flamenco. Every moment is remarkable. Why? Because you start little by little, for example, I started working in hotels in Cádiz, in private parties … For me that were very relevant moments because I was small and I went with more consecrated artists, with names, that danced very well. I have to highlight that. As the years went by, I went to Barcelona for a tablao, which was my first tablao and the first time I met other artists from other cities, with other teachings. That is also remarkable. Everything for me at every moment is remarkable. Or the first time I went to Japan, I did a tour with very big artists and it was very important for me. The collaboration I did with Niña Pastori, which was a very different thing and a big surprise for me because she had not taken artists dancing in her shows and I was an admirer of her since I was a little girl. Every moment of life is remarkable. And it is a before and after because every moment is a unique experience and for me all are valid and precious.

»Finally, what is it for me to work in a tablao? For me, working in a tablao is what I like the most because it is my day to day, my diary dialogue. It’s where I’m most comfortable. I also find it very interesting and magical because every day is different, maybe you coincide some days with some colleagues, other days with others, then that also changes a lot. It is very magical because you never know what is going to happen, according to the day or the people or how they come there are very good days, there are more regular days, there are fantastic days, days of more sadness or more energy. Everything happens. It is the language that we have daily, and it is reflected there. I believe that the tablao is a very big truth. And for me it’s a place where I feel super comfortable and I think it’s one of the best things I know how to do. I love it because it is magical and you never know what is going to happen or what may arise, you always have it as if waiting and open to several things that can happen to you. It is also a very direct language with the public because it interacts a lot in the sense that the public is very close and sees all the details of the artists. All. A lot of things happen too, as better laugh, cry,

they get excited, they talk … There is everything. I like that, too, that there is more freedom. And for me to work in the tablao Las Carboneras is one of the most wonderful places, I love you very much, which is an exquisite treatment, I think it is unique in all the tablaos, to tell you the truth, whenever I go I feel a lot of love, much admiration, respect, love, and that is very important to take care of and that artists feel that way. And the truth is that I love it, it is a sublime and exquisite house ».