She started her studies in Guadalajara, Jalisco (Mexico), at Las Cabales school. At age 16 she won the first prize in the choreography contest of the Iberian Contemporary Festival and began her career in Spain in some of the most prestigious tablaos in Madrid, such as Casa Patas, Las Carboneras and Corral de la Morería, in Barcelona tablaos as Los Tarantos and Casa Camarón and in Granada in La Casa de la Memoria, El Rincón de los Olvidados and Jardines de Zoraya. 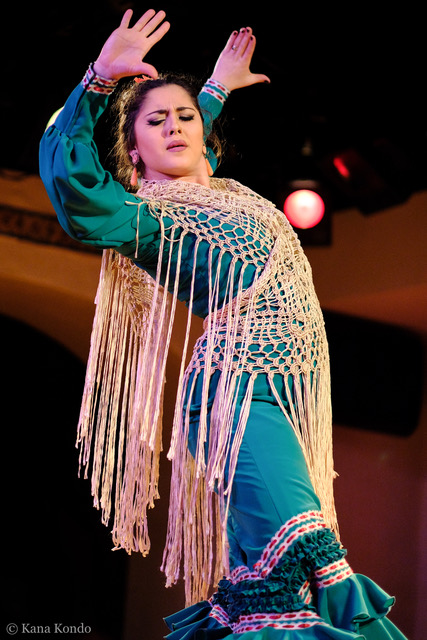 Winner of the prize of the tablao contest of Villa Rosa and the second prize of Las Carboneras.

She is part of the billboard of the Tío Luis de la Juliana Festival together with great artists such as Trini de la Isla and Gabriel de la Tomasa. She participates in different projects of great artists such as “Antojo” by Antonio Canales and Mónica Fernández; Flamenco Festival Panama, with Farruquito, and elaborates her own projects as “Huellas Flamencas” with the Las Cabales dance school in Mexico, collaborating with great artists such as Jesús Carmona, Nino de los Reyes or Lucía Campillo. In the last year she has been part of the flamenco group of bailaor Pedro Córdoba at the prestigious Garlochi tablao in Tokyo (Japan).