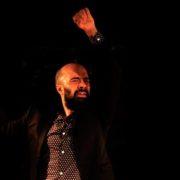 Born in Boston (USA, 1985). He began his professional career with the director Paco Suárez in the show “Campanas flamencas” with La Tati, Milagros Mengíbar, Joaquín Grilo, Antonio Reyes and Isaac de los Reyes. With that show, he visited theaters like Sadler’s Wells in London or the Sydney Opera House. He is required by the flamenco companies of Eduardo Serrano, El Güito, Carmen Cortés, Javier Barón and the Losada family, among others.

He has collaborated with artists such as Pepe Habichuela, Josemi Carmona, Guadiana, Paquete, Jerónimo, Miguel El Rubio, Jesús del Rosario, Camarón de Pitita and Ramón El Portugués. He was part of the group of artists who accompanied the maestro Enrique Morente in his concerts as well as the guitarist Juan Carmona during his tours in France. He has also participated in shows such as “Romancero Gitano” by Paco Suárez, “Vertiges” by Tony Gatlif and “La Celestina” by Gerardo Vera.

In 2013 he participated in the show “Tendencias” by Alfonso Losa, which premiered at the Teatro del Canal in Madrid with different international tours. That same year he collaborates as main bailaor in the show “Flamencas en la sombra” of Montse Cortes and in the Festival of Gent next to José Manuel León. During his stay in the USA in 2013 he was required by the singer-songwriter Paul Simon to collaborate in recording the artist’s latest album. In 2014 he participates in the project “Huellas flamencas” with Jesús Carmona, which opens in Guadalajara (Mexico), and collaborates in the show “En cante a dos” with the singer Montse Cortés and the Israeli singer Yasmin Levy. Premiered at the Teatro Español in Madrid. He also performs a choreographic residency at the Boston Center for the Arts where he creates the show “Two Men”, presented in Boston and Washington. He participates in the assembly of “Bodas de Sangre” at the University of Notre Dame of the USA under the direction of Anton Juan. In June 2014 he is a guest artist at the Spanish Dance and Flamenco Competition in Madrid. In 2015 and 2016 he participates in the following projects: toured the US with his show “Inside”; touring Mexico with the show “Huellas flamencas”; premiere of “Amorente” with José Maldonado and Karen Lugo at the Madrid 2016 Flamenco Festival. That same year is invited by Chick Corea to participate in the 75th anniversary of the Blue Note with great names such as Carles Benavent, Jorge Pardo, Niño Josele And Tom Breitchlein. He is also invited by the percussionist Sergio Martínez to participate in the presentation of the new album “Stranger to Stranger” by Paul Simon at the Barclays Center in Madrid in front of 20,000 people.

He is currently required to join the group that accompanied Paco de Lucia in the show “Beyond the Memory” in honor of the maestro. He also just recorded for Telecinco the program “Las noches del Berlín”, where big names from current flamenco such as Antonio Canales, Farruquito, José Maya, the Porrinas family, Duquende, Juan Antonio Salazar, the Habichuela family and others will appear.

«Every night is magic, different»

“For me Las Carboneras is the tablao where flamenco is lived at its best (tradition, roots, purity, spontaneity, improvisation). Each night is magical, different from others, we live what fills our soul.

»I remember coming to the locker room for the first time at age 16 and wanting to prepare my dance with the musicians. Then, they said to me: “here one sings, one dances and one plays, and that’s all”. That’s real flamenco and I think it was the greatest lesson in my artistic life. “