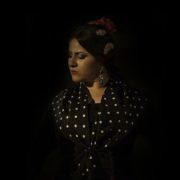 Since she was a child she has danced in various flamenco peñas in Jerez. At age 4 she began taking classes with Manuela Carpio, with whom she danced for the first time in several flamenco peñas in Jerez. She has received dance courses with bailaores and bailaoras such as Ana María López, Manuela Carpio, Eva “La Yerbabuena”, Rocío Molina, Farruquito, Farru, Rafaela Carrasco, Belén Maya, Manuel Liñán, Rosario Toledo, Patricia Ibáñez, Mercedes Ruiz, Ángel Muñoz, Andrés Peña, Marco Flores, Manuel Reyes, Antonio “El Granjero”, Juan de Juan, Chiqui de Jerez and Domingo Ortega. When she turned 13 years old she enters the flamenco tablao El Lagá del Tío Parrilla, where she continues to dance today. She also performed in other flamenco tablaos in Jerez such as La Taberna Flamenca, Tablao Berber and La Cuna Flamenca. The following year she danced at the flamenco peña in Paris, at the Flamenco Festival in London and at the Villamarta theater in Jerez, at the presentation of her uncle Juan Moneo “El Torta”. 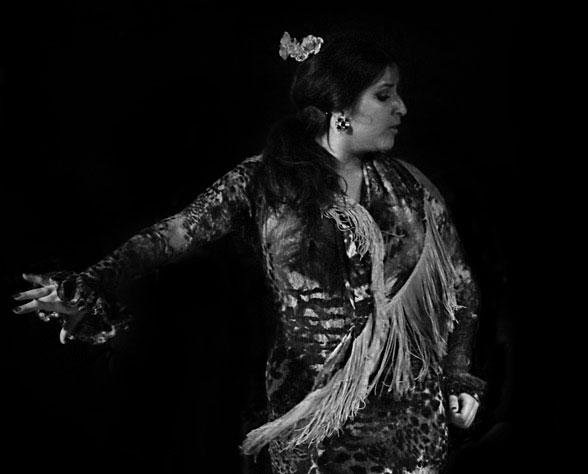 At age 17 she dances at the Geneva Festival (Switzerland), Teatro Alhambra, on Fridays Flamenco in Jerez and at the flamenco festival in Zaragoza. At the age of 18, she began to be part of the dance company of Farruquito with the show “Sonerías”, which premiered at the Bienal of Sevilla 2010 and at the premiere of the new Farruquito show “Baile flamenco” with which they have been on tour by Argentina and Chile in 2012. She then danced with Antonio Fernández Montoya “El Farru” in Bogotá and in Istanbul. She currently works in tablaos of Jerez, tablao El Arenal (Sevilla), Las Carboneras (Madrid) and has participated in the last Farruquito show “Baile flamenco” and as a dancer in the concerts of Diego del Morao.