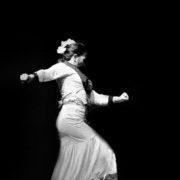 She began her training with the teacher Matilde Coral at the age of 5 years and then she deepen in the Sevillian school with the teacher Manolo Marín in a long apprenticeship. At the age of 15 she continued her training at the Alicia Márquez academy, and between 2010 and 2012 she completed the professional training at the Art Center and Flamenco of Esperanza Fernández and Miguel Vargas.

From that stage she began to make a solo path looking for the definition of her personal style and taking as reference her teachers. Her career combines it with her aesthetic and artistic criteria. These are her teachers: Juana Amaya, Carmen Ledesma, Juan Montoya “Farruquito”, Jose Manuel “El Oruco”, La Farruca, Luis Peña, among others. In the 2014-2015 season, she collaborated as a solo dancer in the shows of the company Mudanza Flamenca, where she presented her work in Andújar (Jaén) and Rute (Córdoba).

The summer of the same year, with the format “Cuarteto del coral”, she toured the Greek islands and taught a course at the Arroyo Nuevo Academy in Athens. In December 2014, in the city of Tokyo, she performed flamenco recitals and courses with the dancer Ayasa Kajiyama. At the end of 2015 she toured Israel and Palestine. As of 2016, she moved to Madrid and began her work with tablaos Café de Chinitas, Café Zyriab, Cortijo, Mr. Pinkleton and Las Carboneras. She was finalist of tablao Villa Rosa in 2017.

“For me, the tablao is the best school there is and where you manage to be yourself,” she says.