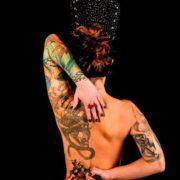 When Tablao Las Carboneras opened in October 2000, the trio of bailaoras who boosted this tablao located in the most castizo Madrid and located next to a cloistered convent from which they borrowed the name, they aspired to renew the flamenco art of tablao from their experience in those places inexorably decorated with typical Andalusian or rocieros elements and with an stiffed artistic offer in which they could not miss the typical sevillanas.

Skipping the norm has never been easy and fusion of the avant-garde with tradition was seen more than 15 years ago as a boldness that bordered blasphemy. But the spirit of these female entrepreneurs was framed in modernity, in the rupture within the canons and sometimes they were nourished of advanced tendencies of the dance joining contemporary and flamenco.

It was not long before that the musical fusion with bands in which Latin American, African and flamenco sounds were mixed (what was known as Nuevo Flamenco) was popularized or that of masters like Enrique Morente that had questioned the orthodoxy next to Lagartija Nick in “Omega”, a milestone which has already turned 20 years.
Fruit of that atmosphere of aesthetic and artistic search, Tablao Las Carboneras not only wanted to enrich flamenco from its stage, but also from its walls. An example is the latest exhibition we have opened, “CON-FUSIÓN, Tattoos and Flamenco”, an original idea by Roberta Venere, an internationally recognized creator of the tattoo scene who has allied with the photography of Alberto Romo and the artistic direction by José Maldonado to hang in our space a series of photographs and drawings that intersect two disciplines untold in the world of art.

Roberta Venere, from Rívoli (Italy), settled in Madrid moved by her fascination with flamenco and began to tattoo dancers and musicians attracted by her technique and aesthetics. That mixture caught the attention of our co-founder Ana Romero and Roberta, at her suggestion, meditated for some time the type of photography suitable to shape that fusion.

“The idea of the Tablao Las Carboneras is that if there is the possibility of mixing, from the most underground to the most sophisticated, with a connection with flamenco, we try to take it into account to host it in our space and accommodate people with desire to do new things,” explains Ana.

“Tattoos and flamenco are disparate arts, old ones, two arts that have traveled along parallel roads but sometimes have touched and enjoyed themselves,” says Roberta. “Young flamenco artists start breaking unwritten rules that made it very difficult to see a tattooed flamenco artist on stage. Perhaps the solemnity of flamenco weighed too much, perhaps breaking with that purity was risky, but without a doubt this wonderful art listens, feels, breathes and evolves. Flamenco and tattoos go hand in hand, tighten the siege and offer me the opportunity to be part of it,” adds the artist.

Artists such as José Maldonado, Guadalupe Torres, Pino Losada, Nino de los Reyes, Triana Maciel, Julia Gimeno, Juan Debel, Francisco Vinuesa, David Carpio, Cheyenne, among others, many of whom are regulars of our Tablao Las Carboneras, have shared with her their deepest thoughts to make them indelible in their skins and in their lives through their tattoos.

The present is linked to the past, the ephemeral to the eternal, the authentic to the profane and this confusion, in which everything flows and goes in a specific direction, my proposal is born: “CON-FUSIÓN, tatuajes y flamenco”, says Roberta in the synopsis of her show.

The exhibition aims to break old themes, to remove the tattoo from the marginal and definitively position it as an artistic expression.
It shows a series of pictures of the photographer Alberto Romo, with the artistic direction of José Maldonado and, through that work, manifests the coexistence of two disciplines that relate to each other in an elegant and wonderful way.
It also shows a series of drawings of own creation, made with different techniques and that evoke an imaginary universe of great flamenco figures tattooed from her perspective.

“Thanks to those who have believed in me and have supported me in this project by offering me their confidence and time.»

Grateful to Life, Tattoo and, of course, to Flamenco».
Thanks to you, Roberta Venere, for choosing Tablao Las Carboneras to present this revolutionary proposal that strengthens our gaze on flamenco.