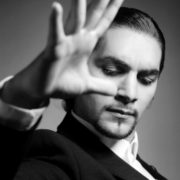 Born in Seville, from the Montoya saga, Farruco‘s grandson and Farruquito‘s cousin. Antonio Moreno Fernández, “Polito”, started his flamenco dance classes with only 7 years with the acclaimed dancer Farruquito. Polito debuted with 9 years on stage in New York with his grandfather Farruco, his uncle the cantaor El Moreno and his cousin Farruquito, continuing to tour the rest of the USA.

A multifaceted artist, he has also danced in the companies of Joaquín Cortés (since he was 8 years old, inauguration of the 1999 athletics world championship in Seville, tour of the USA and Olympic Stadium in Seville in 1999), Manuela Carrasco (Seville Biennial of 2004, with only 11 years old), Antonio Canales (“Trianero, in 2016) and Tomatito (2017). He has also had the fortune to be dancer to singers Beyoncé, Madonna and Marc Anthony, as well as Antonio Carmona and Estrella Morente, among others.

Currently, he is part of the Farruquito company in the shows “Alma Vieja” and “Farruquito y Familia“, in the stages since 2000.

In 2007 he starred with José Coronado in the television series ‘Masala’, produced by Tele 5. He has also participated in the series “Mar de plástico” in 2016, produced by Atresmedia; and in the films “Amigos”, by Marcos Cabota and Borja Manso, of 2011; “Lola”, directed by Miguel Hermoso in 2007; and “Gitano”, directed by Manuel Palacios in 2000. He has a leading role in the last video clip and documentary of the singer “Rosalía“.

He has performed in important tablaos such as El Carmen, in Barcelona, or Cardamomo and Las Carboneras, in Madrid.